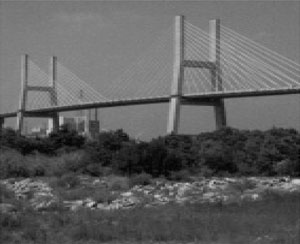 With excellence already widely acclaimed by various engineering societies, Mobile’s Cochrane/Africatown USA Bridge well deserves to be included in the Engineering Hall of Fame. It is the first cable-stayed bridge ever built in Alabama. Its stunning profile, 140 feet above the Mobile River, frequently graces promotional media for the area, and the bridge has become a landmark and symbol of progress to residents and visitors alike. An alternate route for travelers along U.S. Highways 31, 90, and 98, the bridge also provides a safe and expedient way across the water for trucks hauling hazardous cargoes. The tunnels through which those highways and Interstate 10 access Mobile are closed to such trucks, and the Cochrane/Africatown USA Bridge eliminates what would be a 50-mile detour. The bridge also serves the development of heavy industry along the Mobile River and the Alabama State Docks Blakeley Terminal. Thus, the bridge gives a lift to the south Alabama economy.

Opened in 1991, the high-level, fixed structure replaced the vertical-lift Cochrane Bridge. The bridge’s two lanes had served for nearly 60 years but were subject to 14,000 delays annually as the bridge accommodated river traffic. When the old bridge was deemed unsafe in 1984, a ferry was put into temporary use, and David Volkert & Associates was tapped by the Alabama DOT as general consultant for a new structure. Led by Volkert, a design team launched an accelerated schedule, completing final plans for the main span and approaches in just 10 months.

The new bridge is 7,291 feet long, with approaching roadways more than one-half mile long on either side. From the upper half of the main piers (which are 350 feet high, with steel pilings extending 160 feet below sea level), two planes of high-tension steel cables measuring as much as eight inches in diameter fan out to support the main span. The center channel span of the three-span superstructure stretches some 700 feet. Volkert also produced plans for 2,350 feet of roadway improvements east and west.

The new bridge was named in honor of Africatown, a Civil War-era settlement founded by the last group of Africans brought to the United States as slaves. The largely African-American community of Plateau today occupies this historic site, not far from the bridge’s western approach. During designing of the bridge, attention had to be paid to the impact of construction on the historic area, as well as on the aquatic environment and river traffic. To avoid disruption of the latter, the main span of the bridge was cast in place in short, cantilevered segments.

Cable-stayed construction is usually reserved for main spans much longer than 780 feet, but preliminary reports on five design proposals suggested that the cable-stayed design was most economical. In fact, the final cost of the bridge — $68.9 million — fell within four percent of the budgeted figures. The Cochrane/Africatown USA Bridge was also unique in its use of new cable-wrapping materials and techniques needed to exist in the damp salt air and industrial exhausts of the area. A particularly noteworthy innovation was the development of a cable-anchoring system that allows damaged cables to be replaced while the bridge remains open to traffic. Additionally, special design criteria were developed to protect the structure from hurricane winds and the effects of ship impacts.