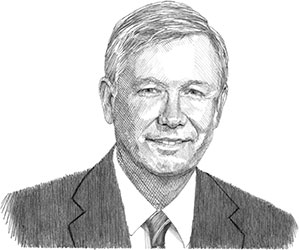 Donald W. Vaughn’s career accomplishments at Alabama Department of Transportation, the largest civil engineering organization in the state, are a tribute to his abilities as an engineer and leader.

Throughout his career of more than 46 years with ALDOT, Vaughn was committed to excellence in transportation and made an enormous impact on the lives of Alabamians. In 2012, he retired as chief engineer and deputy director of the organization.

In 1966, Vaughn began his career with ALDOT as a survey crew member. While working there part time, he earned his bachelor’s degree in civil engineering from Auburn University in 1971. Vaughn has since served as assistant chief engineer, interstate environmental engineer, location engineer, assistant chief of the design bureau, bureau chief of the office engineer bureau and administrative engineer to the transportation director. He was appointed deputy director in 2003 and named chief engineer in 2005. His career carried him from cutting brush as a young man to cutting costs as the department’s top engineer.

As chief engineer and deputy director, Vaughn directed a program that contracted more than $600 million in construction and maintenance projects each year and was responsible for an additional $135 million in annual routine maintenance operations. He managed 11,000 miles of highway and more than 5,600 bridges. Vaughn’s foresight helped him identify future financial limitations and make changes to ALDOT’s priorities. With insufficient state and federal funding, he focused available funding on preservation of the state’s transportation infrastructure.

Over his career, Vaughn oversaw some of the state’s largest projects including Corridor X, a $168-million venture with 96 miles of interstate highway from Birmingham, Ala., to the Mississippi line. He was also involved with the development of major transportation projects such as the Dauphine Island Bridge, the Cochran-Africatown USA Bridge, Interstate 565, Interstate 165 and many more. He was also intricately involved with industry recruiting efforts that brought Mercedes, Honda, Hyundai and Thyssen Krupp to Alabama. Vaughn established ALDOT’s Office of Environmental Compliance and Office of Highway Safety Operations within the Department of Transportation.

Vaughn was passionate about roadway safety. He was appointed by the Federal Highway Administration to serve as a member of the congressionally created Safety Committee to improve the highway safety efforts of FHWA. He served as chair of the American Association of State Highway and Transportation Officials Safety Management Subcommittee. As a result of the group’s success, the 1,000-page AASHTO Highway Safety Manual was published in 2010 and immediately became a best seller. The guidebook is being implemented all over the country.

Vaughn is former president of the Alabama Section of the American Society of Civil Engineers and served on several other policy committees of the American Association of State Highway and Transportation Officials. He served as the first chairman of the University Transportation Center of Alabama and also serves on the advisory board of the Department of Civil, Construction & Environmental Engineering at the University of Alabama at Birmingham. Vaughn is a member of Auburn University’s Civil Engineering Industry Liaison Council and was selected as Auburn’s Outstanding Civil Engineer Alumnus in 2009. He retired from the U.S. Naval Reserves Civil Engineer Corps. at the rank of commander.

Vaughn resides in Montgomery with his wife of 43 years, Becki. They have two children and five grandchildren.