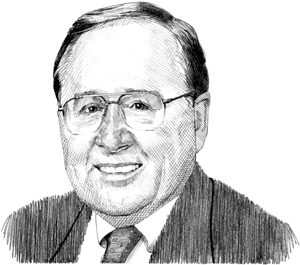 Native Alabama son, Lavon F. Jordan, learned his entrepreneurial lessons from his parents while working in the family’s general store in rural Alabama. Throughout the last 45 years, he has taken those basics and applied them to a career that has substantially benefited the national defense, small business, and environmental, educational, and charitable communities across the nation.

Growing up during World War II, Jordan had no expectations that going to college was a given, but he recognized the value of education and started classes at Jacksonville State College, eventually transferring to Auburn University to earn a bachelor’s degree in mechanical engineering. He honed his skills at Robbins Air Force Base and with the Defense Intelligence Agency’s Missile and Space Intelligence Center in Huntsville, Alabama. He returned to Auburn on scholarship to earn a master’s degree in industrial and systems engineering in 1969.

Jordan headed west to work for General Research Corp., where his valuable experience working with the military and support contractors set him apart. He was promoted to form a new department, which grew to five offices across the country. Jordan’s entrepreneurial spirit was strong and could not be denied. In 1985, he founded Frontier Technology Inc.

Financing the venture himself, he looked for work in the area he knew best—the American defense industry. Under his leadership, Frontier Technology has made significant technical and programmatic contributions toward maturing technologies, modernizing aging systems, and evaluating cost-effective new candidates. A strong advocate for a standardized defense modernization process, Jordan has actively served on two national committees addressing this issue. In 1995, Jordan co-founded the Defense Planning and Analysis Society, which promotes the use of integrated, multilevel planning tools focused on Department of Defense and aerospace decision-makers’ needs. It is no surprise that Jordan is recognized in the aerospace community as a pioneer in quantitative planning and systems analysis.

Jordan has been active in modifying Frontier’s concentration in the defense sector to one that has more commercial emphasis. He promoted the adaptation of the company’s trademarked NormNet technology, which aided the military in avoiding complex equipment failures and enabling condition-based maintenance. In the commercial sector, the system is applied to water purity, pumps and generators as well as the energy sector. It was modified for the national H2O Sentinel program, which provides real-time monitoring technology to detect potential breakdowns and possible threats to municipal water systems. In the energy arena, the system is applied to electrical power generation, oil drilling, and wind power, and will soon be applied to nuclear power.

But life is not made up of work alone. With his wife, Nancy, Jordan travels often to Alabama, visiting family frequently. While there, he takes an active and personal interest in serving customers in Anniston and Huntsville, forging successful business partnerships and generously supporting the educational institutions that provided the foundations for his successful career and life. Close to home in California, Jordan supports the Scholarship Foundation of Santa Barbara and the Royal Family Kids Camp for abused children. Across the globe, he contributes funds and on-site help to an orphanage for street children in Johannesburg, South Africa. In his “spare time” Jordan does long-range plans for nonprofits.