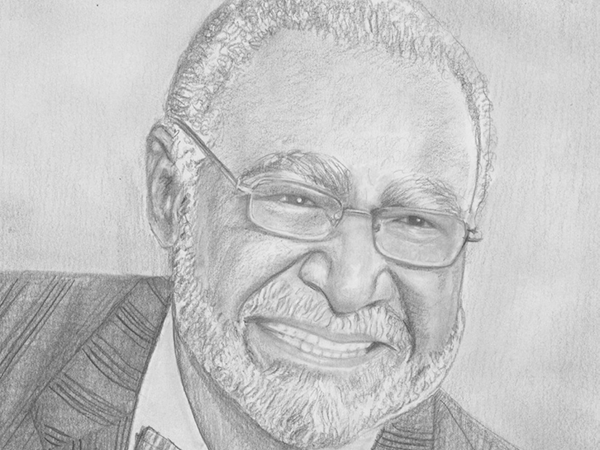 Through dedication and ingenuity, Robert Holmes, Jr., worked his way from a draftsman to the first African American vice president for Alabama Power Company. His trailblazing career saw him contribute innovations for power generation that helped the utility succeed, complementing his legacy for mentoring, and values of fairness and inclusion that elevated him to executive service.

After more than 40 years of service to Alabama Power, Holmes retired in 2010 as Senior Vice President of Ethics and Corporate Concerns and Chairman of the Alabama Power Foundation. He was dedicated to his profession and mentored many rising engineers throughout his career.

Holmes earned a Bachelor of Science degree in mechanical technology and mathematics from Alabama A&M University and began working at Alabama Power as the first degreed African American draftsman, designing whatever was needed, including transmission line pole foundations and transformer foundations. A supervisor encouraged Holmes to get an engineering degree, so he returned to college, graduating from the University of Alabama at Birmingham (UAB) in 1976.

Among his engineering accomplishments were devising nondestructive testing to avert catastrophic failure in high pressure steam pipes and innovating a way to store dry ash at fossil plant sites and later reclaiming the storage sites.

He would eventually hold positions in Alabama Power such as Assistant Plant Manager, Assistant to Chief Financial Officer and, in the early 1990s, Vice President for Human Resources, where he became the company’s first African American vice president.

In 1995, Holmes was named Vice President of Ethics and Corporate Concerns where he was tasked to ensure the business was run based on values-based decision making and the company’s Code of Ethics. He established a central office that offered guidance for employees on questions about ethical business practices.

The organizational and problem-solving skills used in engineering prepared Holmes for the position of Ethics Officer. While serving as Ethics Officer, Holmes was elected to the board of the Ethics Officers Association, the largest association of ethics practitioners in the world. Holmes served as chair of the board for two (2) years. In addition, he served as vice chair of the Josephson Institute of Ethics.

He was later named Senior Vice President and Chairman of the Alabama Power Foundation, the largest corporate foundation in Alabama. He provided direction and leadership in the foundation’s focus on giving back to the community through grants in five key areas: education, health and human services, environment, arts and culture, and civic and community.

Holmes was also deeply involved in the American Association of Blacks in Energy both nationally and in the Birmingham chapter. Through this organization, he ensured the input of minorities in the discussions and development of energy policies, regulations, technologies, and environmental issues, and worked with Congress and other national organizations to discuss energy-related issues. He also supported his local chapter’s efforts to support the development of engineers and students in other STEM-related fields through annual scholarships. He served a two-year term on the AABE national board of directors.